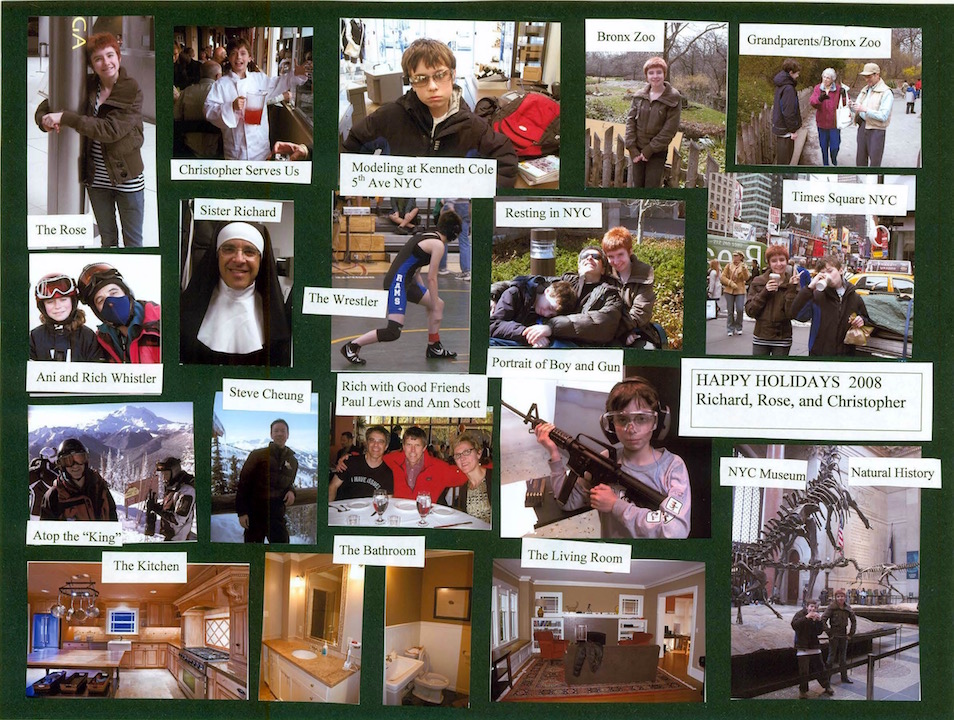 Now that the ski resorts are closed, I’m finally ready to do my 2008 Holiday Letter!

My last Holiday letter reported a “very eventful” 2007 in which I had a crash course in how to be single and divorced.  Not satisfied with a merely “very-eventful-life,” in 2008, I entered a phase of “super-eventful” by remodeling my house.  I had a vision of a gourmet kitchen, a “gourmet” second floor bathroom, the addition of first floor bathroom, and more modern paint colors than 1970’s yellows and pinks.  Design discussions started in June 07, the construction work started in March 08 and the project finished in October 08.  The end result is beautiful.  To celebrate the project, I hired a chef to cook a feast in my new kitchen for 40 friends.  A month later, I hosted Thanksgiving 2008 for 15 people which included my sister and her family.  I’ve continued to host many events and parties.

Not satisfied with “super-eventful-living,” I increased to “super-extreme-eventful-living”   in late 2007 by starting to date men instead of women.  I had to face the challenge of having had zero physical or romantic experiences with men and zero experience in gay culture.  I also had to face my fears of rejection by friends and family, by society in general and my own prejudices against gay men.  People told me that guys in my position experience a second adolescence.   I didn’t like my first adolescence.   I was scared.  What else to do but to study, take classes and become an expert.  I continued my studies in the Work by Byron Katie where I have found the joy of an increasingly free mind.  I also took workshops from The Body Electric School, a school dedicated to exploring physical and erotic paths to spiritual enlightenment.   I also informed my friends and family of my switch to men and have been very grateful for their support.

I joined the Seattle Men’s Chorus, and several other “gay” groups dedicated to activities such as skiing, hiking, meditation, to name a few.  I started building a new social network of friends.  The Men’s Chorus, in particular, has given me many great personal and musical experiences.  One such experience was when Debbi Reynolds came to sing with the Men’s Chorus in March 09.   I had a small walk-on roll as a nun.  I was in full nun habit back stage during rehearsal when Ms. Reynolds walked by me, looked me up and down, and told me I was cute!  Apparently, Ms. Reynolds was correct.  I dated a lot.  In Sept 2008, I met Steve Cheung and we’ve been essentially living together since.

People always ask me how the kids are doing with all these changes.  I answer, “very well.”  They are comfortable with themselves and have been very supportive of me.  Rachel has also been wonderful.  She maintains honesty, integrity and compassion towards herself, me, and the kids; even in the face of the usual post-divorce issues of money and scheduling, and in our case, the additional element of my switch to men.  She has been very good about facilitating my time with the kids and she is, as she has always been, a calm and wise presence in my life.

Rose started High School in 2008 and selected an International Baccalaureate program with the idea of going to college out of country.  She is one of the most organized and motivated people I know.  She gets good grades and doesn’t seem to need, and certainly doesn’t want much help with her studies.  She continued fencing and started a new sport, wrestling, under a charismatic coach at her school.  My inner-Jewish-mother told me that wrestling was too dangerous.  So I was relieved when Rose’s wrestling career was cut short after several months.  She got a rib injury and has not returned to wrestling.  She also started to earn her own money teaching viola lessons to younger children.  She continues to fence and play viola and is in her school orchestra.

Christopher started Middle School in 2008.  He is getting good grades.  He loves learning things though not necessarily learning exactly how his teachers want him to learn.  His rapidly growing knowledge comes not only from school, but from a TV show called “Myth Busters,” in which nerdy adult men do experiments to examine claims such as “my sheriff badge stopped a bullet.”  He asks me a lot of questions that I don’t know the answers to.  He took up the violin and is working hard to get into the elite level middle school orchestra and has continued his piano lessons.  True to form, he prefers composing his own songs to playing what others have written.  His own songs are wonderful.  He’s like a miniature Keith Jarrett.  We moved from Nerf guns to real guns in 2008 when I decided to “go with the flow” and took him and Rose to a firing range for lessons on how to properly and safely use firearms.  I had never fired a gun either and I enjoyed the target shooting as much as the kids.  There are no plans afoot to actually buy and keep guns, just to go target shooting every once in a while.

2007 and early 2008 included some great trips/vacations.  In August 2007 we went to the Unitarian Church family summer camp as we have been doing for years.  In February 2008, Steve, Christopher and I went to Whistler for a ski vacation, one of the best ever.   In April 2008, I took the kids to NYC for 6 days where we took in 5 Broadway shows, saw the sights, shopped and did a lot of walking.  And we rendezvoused with my parents at the Bronx Zoo, a nostalgic visit for me as visiting that zoo once a year was a highlight of my childhood.  The kids loved NYC.  They raved, “Best trip ever!”  This coming summer, we plan to go again to church camp for a week and to also take a week long trip to the Bay Area including visits to old friends and to Yosemite.  I’m also looking forward to returning to NYC with Steve, a 4 day trip in September to Los Angeles for a Body Electric workshop, a 10 day retreat in October at the School for the Work with Byron Katie, and of course, lots of skiing come winter.

Prior to 2007, I felt that my life was like a bike ride in which I had done the climbing section (med school, finding love, getting married, becoming financially stable etc.) and I was coasting down hill.  I could relax and enjoy the view.  In 2007, I had a metaphorical bike crash (divorce, moving, financial challenges, sexuality challenges etc.).  It hurt.  Rehab has not always been fun, but I’ve gotten back on the bike.   And I’ve come to realize that I’m not the trip leader.  The actual trip leader is a lot more creative than I would ever be.   I’m having an amazing trip.