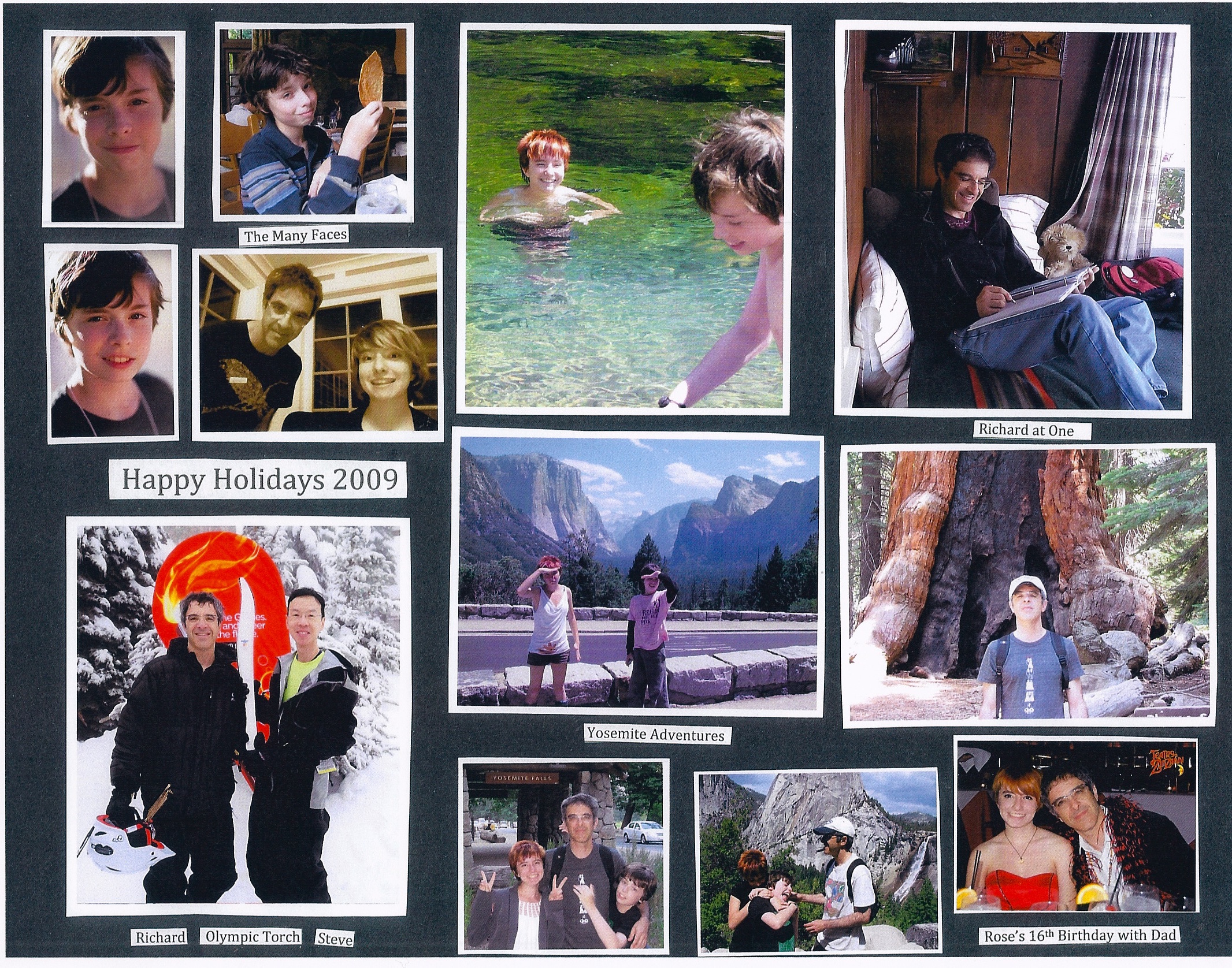 In previous episodes, my inner animal had evolved from Pomeranian to Water Buffalo and finally to Otter.  I had gotten divorced, come out as a gay man, gotten involved in a relationship with Steve Cheung, joined the Seattle Men’s Chorus, continued in the Work of Byron Katie and in Body Electric, and had remodeled a house.

Shortly after my last Holiday letter, in July 2009, Steve and I broke up.  Not surprisingly, this lead to me being single.  I had always hated being single.  When in doubt, study.  I developed a curriculum for myself to enjoy being single, complete with notebook and assignments.  I did pretty well.  I’ve since taken the Myer Brigg’s test and I seem to be an extreme extrovert, though not always a skilled extrovert.  In December 2009, Steve reappeared in my life.  I still found him to be a most amazing man: exotic, attractive, honest, and unique; but I was concerned about repeating our old patterns.  I did a visioning of what was wanted of me with him and it came to me that I wanted to be with him.   I asked him to come back and he said Yes.  We come from much different cultures, him, Hong Kong Chinese, me, Jewish Neurotic.  We learn from each other.  After sulking for my entire childhood whenever my mother dragged me shopping, I have learned to actually enjoy an Outlet Mall, courtesy of Steve, a 5th Level Black Belt Outlet Mall Sensei.  My own Black Belt is in new adventuring, and Steve has enjoyed adventures with me such as skiing and learning how to make Thai food at the Blue Ribbon Cooking School in Seattle.  We have fun. Sometimes we’re pouty, though not necessarily at the same time.  In these pouty moments, I have discovered that it works better for me take 100% responsibility for my own suffering, to take whatever advice I want to give him, and to be completely open and honest.  I’m learning amazing things from him in ways I would never have expected.  Good things happen to me when I’m with him.

I have gotten even more deeply into the Work of Byron Katie. In the Work I have found peace, joy, and dare I say it, enlightenment.   I have also continued exploring the wisdom of my body by taking more courses with the Body Electric School and co-starting a local men’s group where we delve into the Divine as manifested in our own bodies.

My regular career flourished in 2009/2010.   Many friends and acquaintances lost their jobs during “the worst economy of our generation.”  I was fortunate to not only have a job, but to like it and to also be needed in my workplace more than ever.  I worked many extra hours and was able to pay off the loan I took out for my remodel.  I considered taking a job in San Francisco (more on the reasons for that later) and eventually decided to stay in Seattle.

2009/2010 saw a major medical improvement in my life.  I had suffered from migraine headaches since at least age 9.   The medicine I had been taking for years started causing memory problems so I stopped taking it. That led to the return of frequent headaches.  I had run out of options.  Over 40 years, I had tried everything to stop those headaches…but I hadn’t consulted the Oracle of Astoria, aka Laura Snyder (my sister).

In a sacred place shrouded in mists of the ages, (OK it was her kitchen), she told me to stop eating Gluten.  OMG !  Stop eating bread and cookies, the only two reliable pleasures of my life.  On a Gluten free diet, I went from an average of 1-2 headaches a week to zero.  I have stayed on that diet.  I also gained even more awe and respect, if that is possible, for my sister.  A wonderful side effect of this diet has been mild weight loss.  I love the way I look, about 5 pounds less than my normal weight of the last 20 years.

2009/2010 also was also the time for my every five year kidney stone followed by surgery.  Here’s to another five years !   And it was the time for a neck disk herniation leading to severe upper back pain and a weak hand.  I thought it meant the end of my career and even worse, the end of skiing.  Fortunately, I got completely better in 6 weeks and am looking forward to more career and more skiing.

But what about the kids you may ask.  The last 12 months have been a really big period for them and for my relationship with them.  In Sept, 2009, Rachel announced that she wanted to live with… John Tarrant… …her boyfriend… …in California….  …with the kids.   His home, to which they would move, is in Santa Rosa, CA, one hour north of San Francisco and a few hours by plane from Seattle.  (Hence the reason for me considering taking a job in San Francisco.)

Rachel’s move has given me a lot to think about and has been challenging for me.  Nonetheless, I’ve been very proud of how Rachel, John, the kids and I have handled it.

I am learning that: Just because I would not have chosen something; just because friends and family get sad and mad on behalf, doesn’t mean that what is happening is all bad.   I’m not saying that I’ve arrived 100% at “really good thing.”  I am, however, enjoying opening to possibilities and opportunities.   For example, I will get to visit the Bay Area myself more often.  I will get to see the kids for special occasions and not be the one who herds them into homework and practicing.  I will get more space in my life to discover who I really am and what I really want.

The kids were initially scared and desperate.  Rose reached out to friends.  She won’t say what went on with them other than that there were tears.  I’m glad that she trusts her friends in that way.  Her positive attitude, can-do approach, and generally good nature show me that whatever she is doing is working for her.  Christopher reached out to his computer… and also to me.  It has been a privilege to hear his uncensored experience.

Rachel, as usual, seems to be making good decisions and has showed Christopher (Rose too) the advantages of the move including a new school for Christopher which features a loaner Mac laptop and a focus on things nerdy.   Both she and John have been honest and open communicators.   They are clear on what they want to be doing in their lives.  (I, on the other hand, am not so clear about mine.)  They are also keeping a keen eye on the kids’ well being.

The kids, of course, have their own lives apart from that of their parents.  Rose had her sweet 16 birthday this year.  She is driving.  She has even been allowed to drive Steve’s car (a privilege not yet granted to me) and got compliments on her driving from him. (another privilege not yet granted to me).  She has retired from fencing and has gotten involved in something called Color Guard in which she twirls flags and wooden rifles in formation to emotionally laden music.  She is also involved in Rocket Club where they launch model rockets.  Her club went to Washington DC for a national competition.  They took 4th place, a very high honor.  She still plays Viola and occasionally asks her very grateful father to play piano or flute with her.  After watching the Winter Olympics everyday, she asked her stunned father to take her downhill skiing for the first time in two years, and of course he did.

Christopher continued to move through the long chain of obsessions that started with trucks and vacuum cleaners as a baby.  This last year he got heavily into doing magic.  He got pretty good at it and earned $100 doing magic at our week long summer camp. He also gave several stellar performances at my house for parties.  And then the magic obsession was over.  He moved into computers. I reluctantly got involved in adding video cards and sound cards to old computers and in reinstalling operating systems. Christopher’s never-read-the-directions-I-know-exactly-what-to-do approach to the unforgiving world of computers resulted in me giving him the name “The Death Star to Computers.”  The computer obsession continues and we have added a Sony Playstation 3 and an I-Touch to the obsession hit parade.

Next year will feature a summer week in Boston with the kids and Steve, a week long summer Body Electric Retreat for me, more Byron Katie study, more exploration with Steve and a new world of relationship between me and the kids.