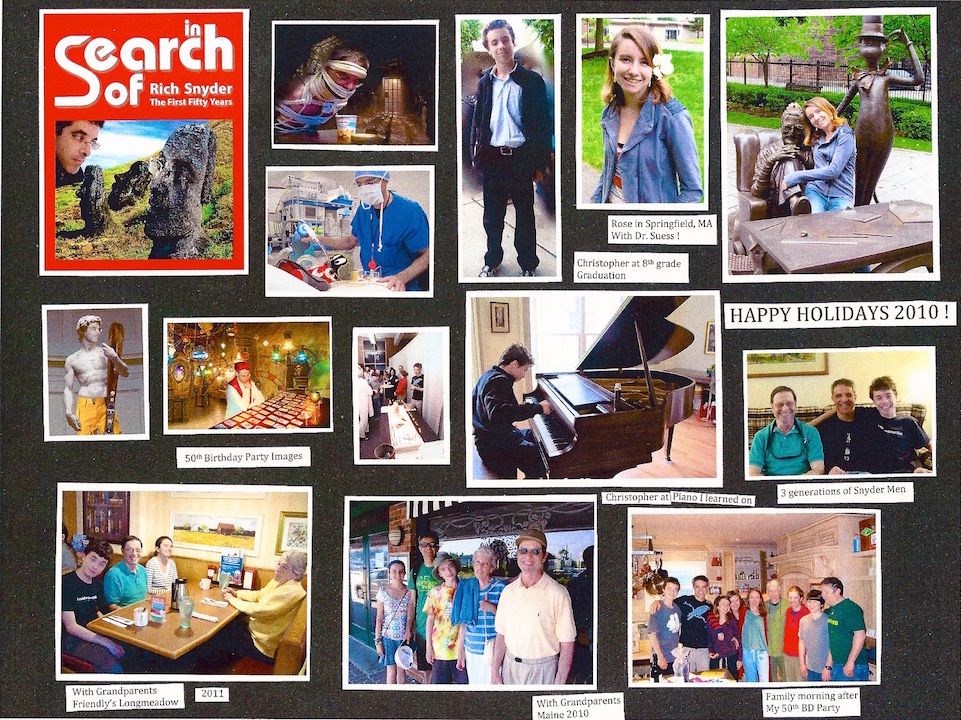 I thought that 2009 was a big year…. dealing with Rachel and the kids’ impending move to CA, getting back together with Steve, the ending of migraine headaches after 40 years (thanks to gluten free diet), kidney stone surgery, a cervical disk herniation and its resolution, ongoing study of the Work by Byron Katie, the Body Electric/Tantra and Religious Science and my usual busy career in Anesthesiology.

Just after sending off my last Holiday Letter, the kids, Steve, and I took a weeklong trip to Boston where we saw my parents, and explored Boston and Maine.  During that trip, I saw more clearly that my partnership with Steve was ending.  When I returned, Steve and I broke up.   At the same time, Rachel and I finished up re-negotiating child support in anticipation of her move.  I was anticipating my 50th birthday in 6 months, the landmark age in which guys who hope to attract romance into their life really start lying about their age.  Yikes!  When in doubt, go to a Byron Katie retreat.   I went to one in Ojai where I met Christine McHugh, a woman who makes a living helping people do one-man-shows to mark significant life events.  Let’s see…..  turning 50, kids moving away, breaking up with my partner.  Yes.  I was having significant life events.  Definitely time for a Show !

As I write this letter, I am several weeks out after performing the Show.  It was ninety minutes of eight monologs and a couple of songs about my journey of the last 50 years.  You can find the 8 chapters and bonus chapters by searching You Tube for richsnyder11.  Just keep on scrolling down until you find me.

Despite having no acting experience, I performed my show to rave reviews for 175 guests on May 21, 2011.  For me, the miracle of the show wasn’t just the actual performance.  It was the entire year of creation and preparation.  You know that Lion King thing when Simba returns to the Pride Land and all of nature seems to support his return.  Well, that’s pretty much what happened for me.   For 12 months, all the ideas, the people, the places, and the resources just appeared out of thin air. The show was an awesome experience of Ease and Love.

Was an all-consuming-year-long project to do a one-man-show enough bigness for me in 2010?  Apparently not!  I attended and/or staffed several Byron Katie retreats.  I took classes at Center For Spiritual Living.  I organized many events at my house.  I did the introductory weekend to the Mankind Projec and their training for on-going work.  And then co-created a group to continue the work.  I sung three concert series with the Seattle Men’s chorus and financially supported our landmark concert on the transition from the artistic and sexual liberation of the Weimar Republic to the oppression and violence of Nazi Germany.   I organized a week long Ski Trip to Whistler for 25 men, did two additional weeklong ski trips and my usual 30 plus days of skiing.  I also started weekly personal fitness training in which I finally found a trainer who could help me get stronger without injuring myself.   And I started an amazing exploration of singing, vocal technique and Tantra study with a new singing teacher.

Ummmm….  this Holiday letter should probably include the kids.    I am here to report that their move to CA was a resounding success.   Living with a happy mother, a Zen-master stepfather…  and sheep…. in beautiful and inspiring Santa Rosa, CA, suits them well.  Rose rose (alliteration to the max!) to meet the challenges of her new High School, taking many AP classes and continuing her personal tradition of scary-beyond-belief organizational skills and discipline.  She became an outstanding driver and got her own car.  She got herself her own puppy, Xochi, a headstrong and energetic border collie and got herself a boyfriend, Ryan, a stable and supportive partner.  Rose and I agree that her relationships to her dog and her boyfriend are healthier in many respects than my past relationships.  I love that the next generation is improving on the traditions set by the prior.  She is still playing viola and has found new enjoyment in the world of cooking.   She is becoming a good and enthusiastic cook.  She is now looking into colleges with her usual flair for knowing exactly what fits for her.

As you may know about Christopher, he has an extremely high level of discernment and rarely gives out good reviews.  Actually, until this year, he never gave out good reviews…  for anything.   But, I can now quote him as saying, “I like my new school.”  I think I felt the planet stop spinning for a moment when he said that.  The new school, what he calls a “nerd school,” provided and expected him to use a new Mac book computer.   On it, he wrote a 40-page novel called, “Stalkers,” which was as a good a read as anything I’ve found at Barnes and Nobles.  While Rose was attending to dogs, sheep and boyfriends, Christopher established a “nerd cave,” in his new home.   He spends many hours playing and creating on-line games.  He networks electronically with kids from across the country and has a significant fan base on You Tube.  He has also continued his music.  He takes piano lessons and music composition lessons.   He underwent an amazing transformation from little kid to young man, having grown 5 inches in height, and dropping one octave in his voice.  He also entered the world of romance… with girls… and, like his sister, seems to be more together in the world of relationships than I have been.   He graduated 8th grade this year.

The coming year  will also involve college decisions for Rose, and High School for Christopher.   For me…  well… I am on the cusp of more bigness.  I can feel it.  My Show showed me (another alliteration!) what life could feel like in Lion King consciousness and I want more of it.  I am not yet clear on how this will unfold.  I do know that it will involve continued deepening of my spiritual practices, re-arrangement of my Anesthesiology career, and life work that gives me prosperity, abundance, ease and love.