At sunset on December 4th, 1972, a 12 year old boy featuring a teen-age-not-yet-shaved-but-should-have-been-but-it-was-too-embarassing-because-none-of-the-other-kids-were-so-hairy moustache was waiting at the yellow Formica kitchen counter.  To the right a glass fish bowl with 2 guppies looking pretty good despite having had 10’s of babies 2 days before which had been immediately removed and given to the neighbors so the guppy babies would not be eaten by their parents.  To his left, a Kitchen Aid electric range, unnaturally spotless due to his mother’s phobia for child fingerprints on appliances.  In front of him, a bronze menorah.   While he lit the 4 candles, he, his mother, sister and brother quickly recited, “Baruch atah Adonia, Eloheinu melech haolam, asher kid’shanu b’mitzvotv v’tsivanu l’hadlik ner shel Hanukkah,” the Hebrew blessing for Hanukkah that causes your parents to give you presents.  This was the only Jewish religious practice I could do, and a few years later I stopped doing it. 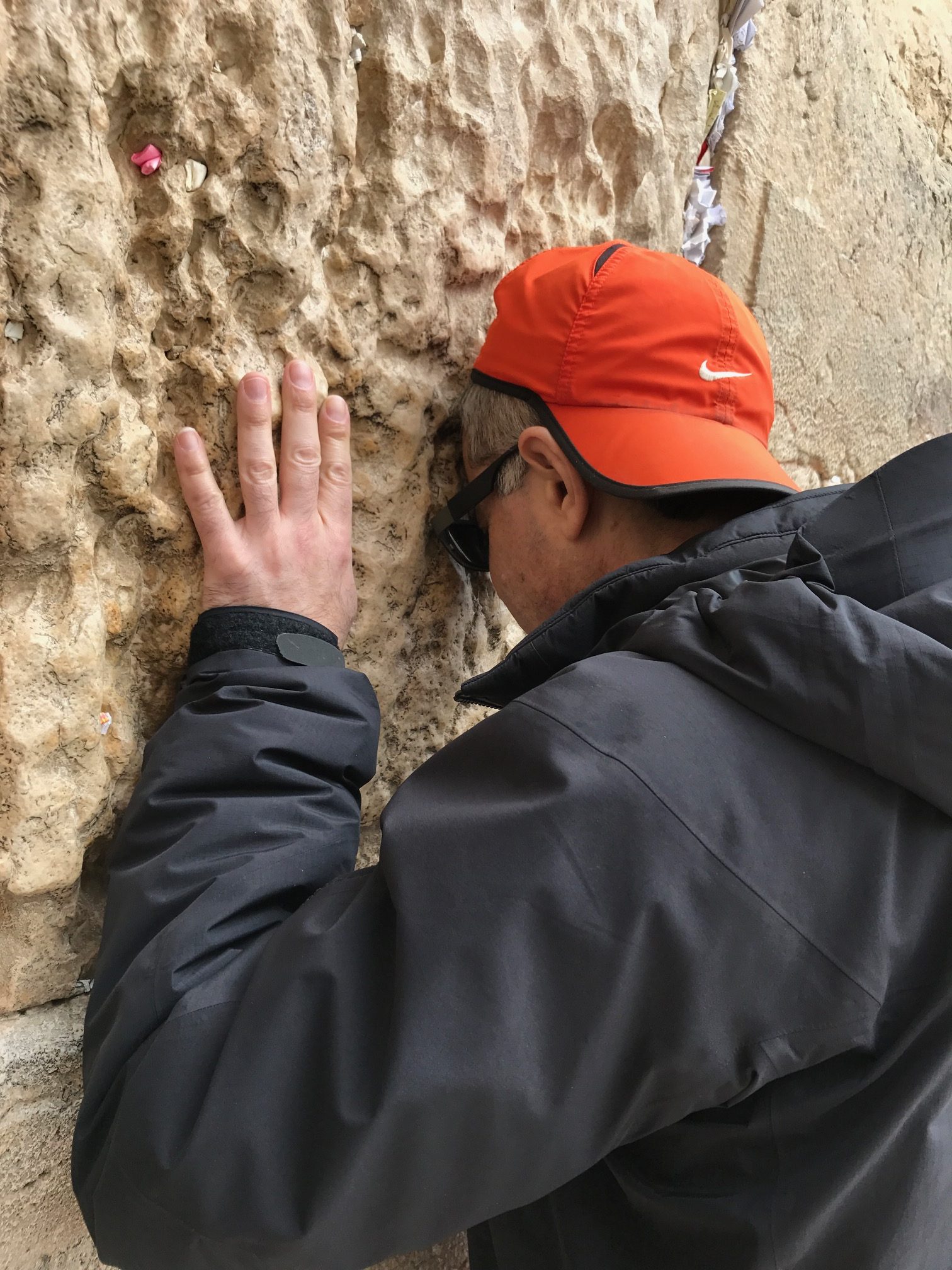 On March 19th, 2016, after forty four years of minimal interest in the Jewish religion, I touched the Western Wall in Jerusalem. As far as I know, I’m the only person in in my family to have done this.  Fajar and I went to Israel to visit the pilgrimage sites of our respective Catholic and Jewish roots, eat well, enjoy the sun, and learn modern Israeli culture. 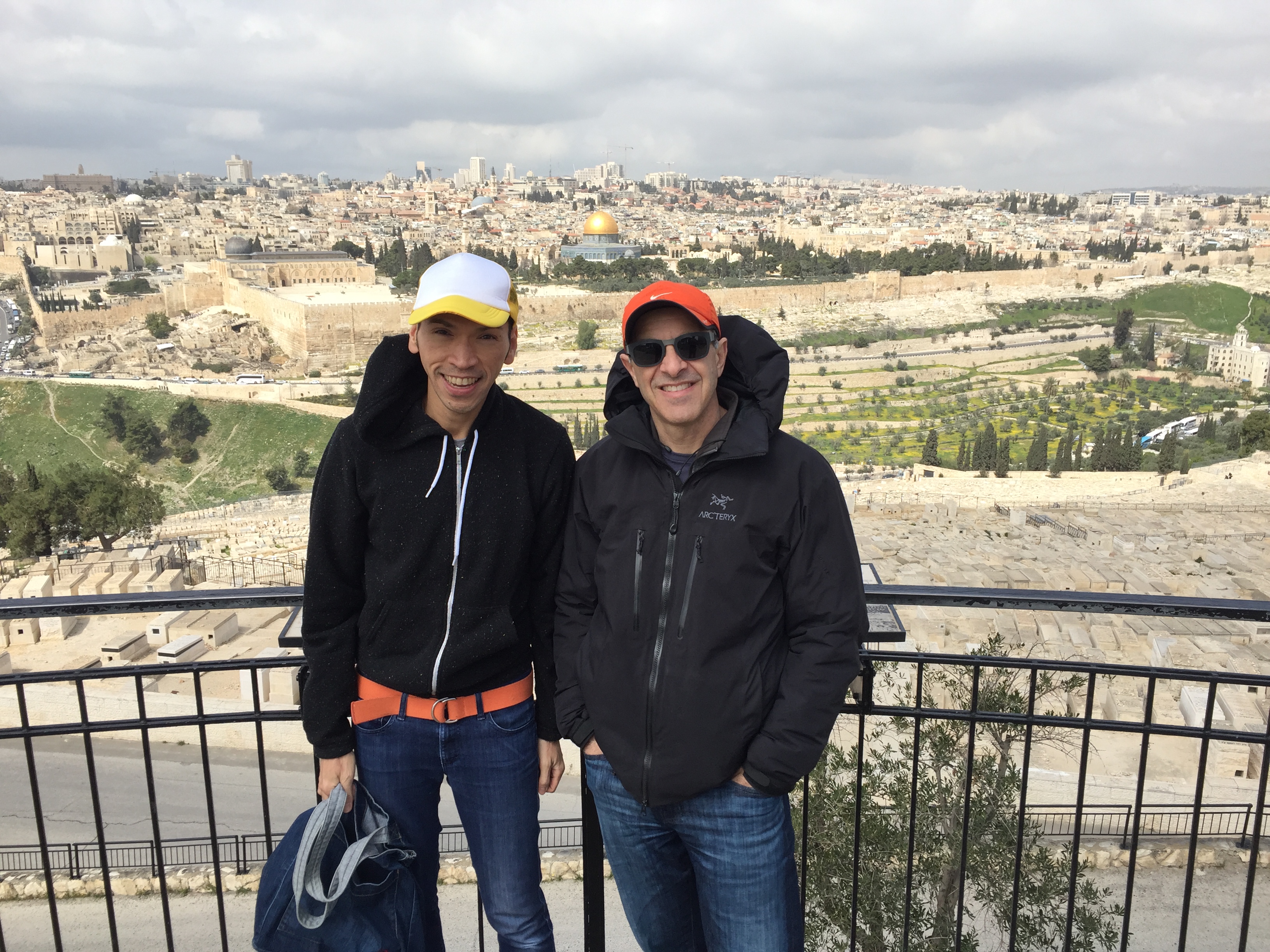 I prayed for myself at the Church of the Holy Sepulchre, the church built over the burial location of Jesus. 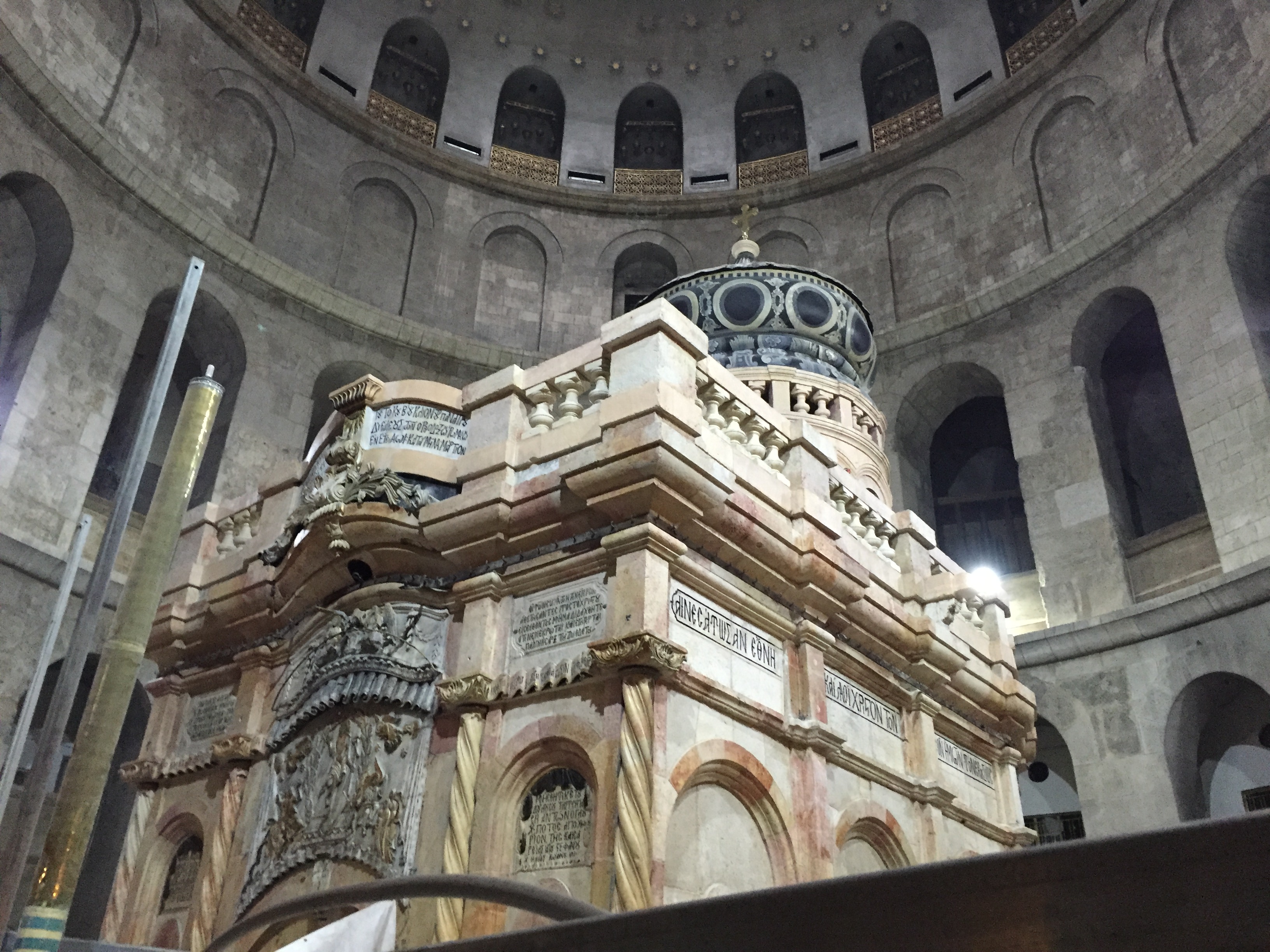 The original structure was built in the 2nd century A.D. by the Roman emperor Hadrian.  It’s such a large interior space that birds fly around in it and when they get up near the domed ceiling they are so far away you can’t hear them.  It’s so Holy that an ancient document called the Status Quo specifies how the site is to be shared between religious communities– Roman Catholics, Greek, Armenian, and Ethiopian Orthodox.  Within the building is Golgatha–the rock upon which the cross was raised for the crucifixion, the Stone of Anointing–a slab of rock on which Jesus’ body was prepared for burial by Joseph of Arimathea, the Aedicule– the tomb of Jesus.

We arrived there 4:00pm on Monday afternoon, exhausted from our 22,000 steps of touring Jerusalem’s sites, food and culture. Mobs of people speaking Nigerian to Mandarin, Arabic to Hebrew were pushing each other to get near the holy objects.  People were collapsing and crying as they touched them.  Just as I was to touch Golgotha through a hole in the floor under an altar, an elderly Russian woman pushed me out of the way and took my spot.  I joined the frenzy and cut in front of a white haired man with a cane and I touched it.

Hoping for more of the sacred and less of the fighting, we went back to the church at 6:30a.m. the next morning.  A group of Franciscan monks were in the Rotunda singing Gregorian Chants.

I took that moment to pray for an old and unmet personal wish—an invitation to move to a new city with a warm and sunny climate, financial prosperity, inspirational nature and culture, and a thriving life for me.

I looked up at the birds flying under the dome, I heard the Gregorian chants.  If I was to get an insight anywhere, it would be here.  Then a voice in my head said, “CONTRIBUTE.” I started crying which told me that the message was important.  But, like my Hanukkah presents in 1972, it was good, but not exactly what I asked for.

Two days later, Fajar and I were eating a lunch prepared by a Druze woman.  The Druze are an Arabic speaking Islamic sect of which about 100,000 live in villages in Northern Israel. We ate chicken, hummus, kafta, locally grown vegetables, baklava, and Turkish coffee. I asked her how she started her business of cooking for tourists.  She said, “eight years ago, a Jewish friend from a Kibbutz asked me to make lunch for a few of her friends.  She offered to pay but I wouldn’t take money for that. Word got out.  Another group asked me to cook for them, then another and another.  Now I’m so busy.” 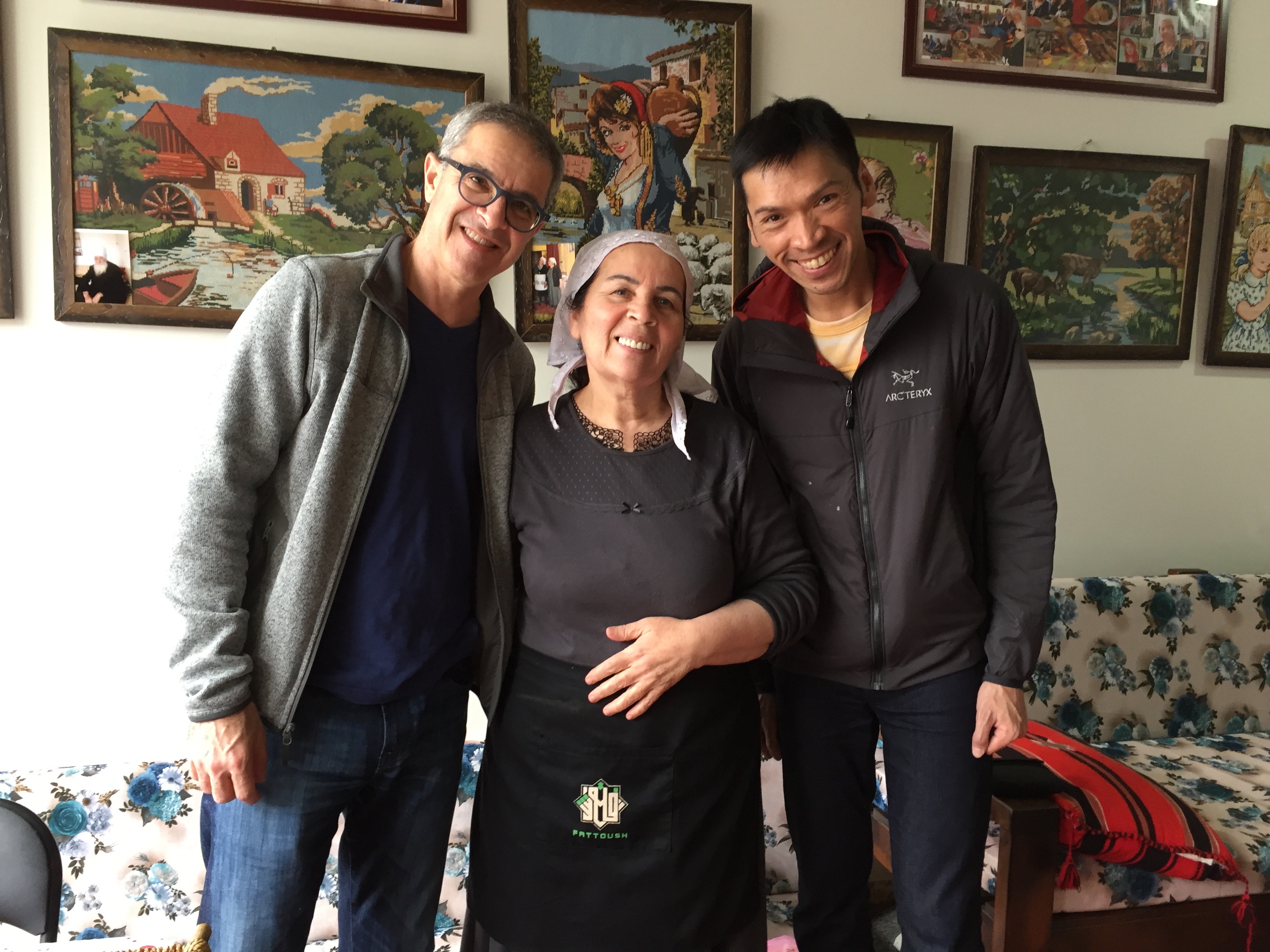 I didn’t get her humus recipe, but I did get her CONTRIBUTE recipe.  God had heard my request.  But, rather than giving me exactly what I wanted, He gave me advice.   A Jewish moment brought to me by a Christian Church and an Islamic woman.

I got back home and the Jewishness continued, albeit at the secular level.  I started my second semester of Meisner Acting Class.  In the 1940’s, Sanford Meisner, Stella Adler, and Lee Strasberg all opened acting conservatories in NYC that remain iconic today.  While these titans of American Acting pedagogy had differences in their approaches, they had one thing in common.  They were Jewish.  They don’t mention Judiasm in their teachings, but I think it’s in there.

In Israel, I learned that my people are not just intellectual, funny, and hairy; we are tough, persistent, and non-apologetic. Israel is surrounded by hostile states, has experienced 8 wars over 50 years; and in response has created one of the most advanced and effective militaries in the world.  We met an older man who, as a child, had known David Ben Gurion, the founder of Israel.  I asked him what Ben Gurion was like.  He said “not a nice man.”   There’s a joke that was apparently first published in the Israeli newspaper that sums up some of our daily interactions in Israel,  “A reporter says to an Israeli, a Russian and an American, ‘Excuse me, can I get your opinion on the food shortage in Africa?’ the Russian says: ‘What’s an opinion?’ The American says: ‘What’s a shortage?’ and the Israeli says: ‘What’s excuse me?’”

I had been warned that the acting class would be difficult, “Meisner classes are very scary when done correctly.” I was instructed to: “be effected by your scene partner,” “use my imagination to create extreme personal meaning,” “impact my scene partner at a molecular level.”   I asked how to do that.  The teacher wouldn’t tell me how.  She told to try over and over and discover what worked for me.  So I tried and I got feedback: “stop being defensive,” “you’re not listening to them,” “you’re being self-conscious.” Each week, my failings would send me spinning into personal doubts that were even worse than my medical internship.  Never apologizing for her blows to my self-esteem, our teacher would remind us that we signed up for class and no one was making us do it.  My inner Jew rose to the challenge.

By the end of the class, I knew I wanted to contribute by bringing characters to life on stage and in film.  I wanted to be a professional actor. I made a plan:  Take a sabbatical from work. Do a yearlong acting conservatory in NYC with Fajar in NYC as well.      Come back to Seattle. Do anesthesiology and acting part time. Retire in a few years.  Do acting full time. It seems a little crazy to start something so difficult at the age of 56 but, like my immigrant ancestors and my Israeli brethren, I’m tough, persistent, and non-apologetic.

Whereas I’m 100% Jewish by DNA testing, Fajar is 0%.  True to his Melanesian and Chinese genetics, he is thoughtful of others to a fault and not particularly hairy.  His resting facial expression is a radiant smile; mine, one of examination.

He shows me the importance of listening, respect, and consideration.  I show him the importance of thinking about one’s own desires, relentless focus on goals, and sarcastic humor.  As Sid the sloth in “Ice Age,” said about Manny, the Jewish wooly mammoth and Eillie, his very non-Jewish wooly mammoth girlfriend, “We complete each other.”  Adventuring together is our specialty.  It was his idea to go back to the Church of the Holy Sepulchre in the early morning.  It was his idea to go to Israel in the first place.  We are both looking forward to our adventure in New York City.

Rose and Christopher are only half Jewish.  But they’ve managed to check off the Jewish boxes:  intelligent, funny, tough, persistent, non-apologetic.  And as a bonus Jewish box: not give me exactly what I ask for.   Rose got accepted to UW Law School to arm herself with a law degree for her upcoming social justice battles.  She asked me if she should apply for a summer job as a tour guide at Seattle Underground Tours.  I gave her advice, “most of those tour guides are professional actors, don’t bother.”  Well, she applied and is now one of their go-to tour guides.  She wanted to enroll her anxious dog in expensive dog school.  I told her it would be a waste of money.  Well, the dog is going to dog school.  Her superpower is giant presence in small body.  Her second summer job is with a non-profit who sends their employees door-to-door to solicit donations and actions for a variety of causes.  She’s a star there too. People say yes to her. 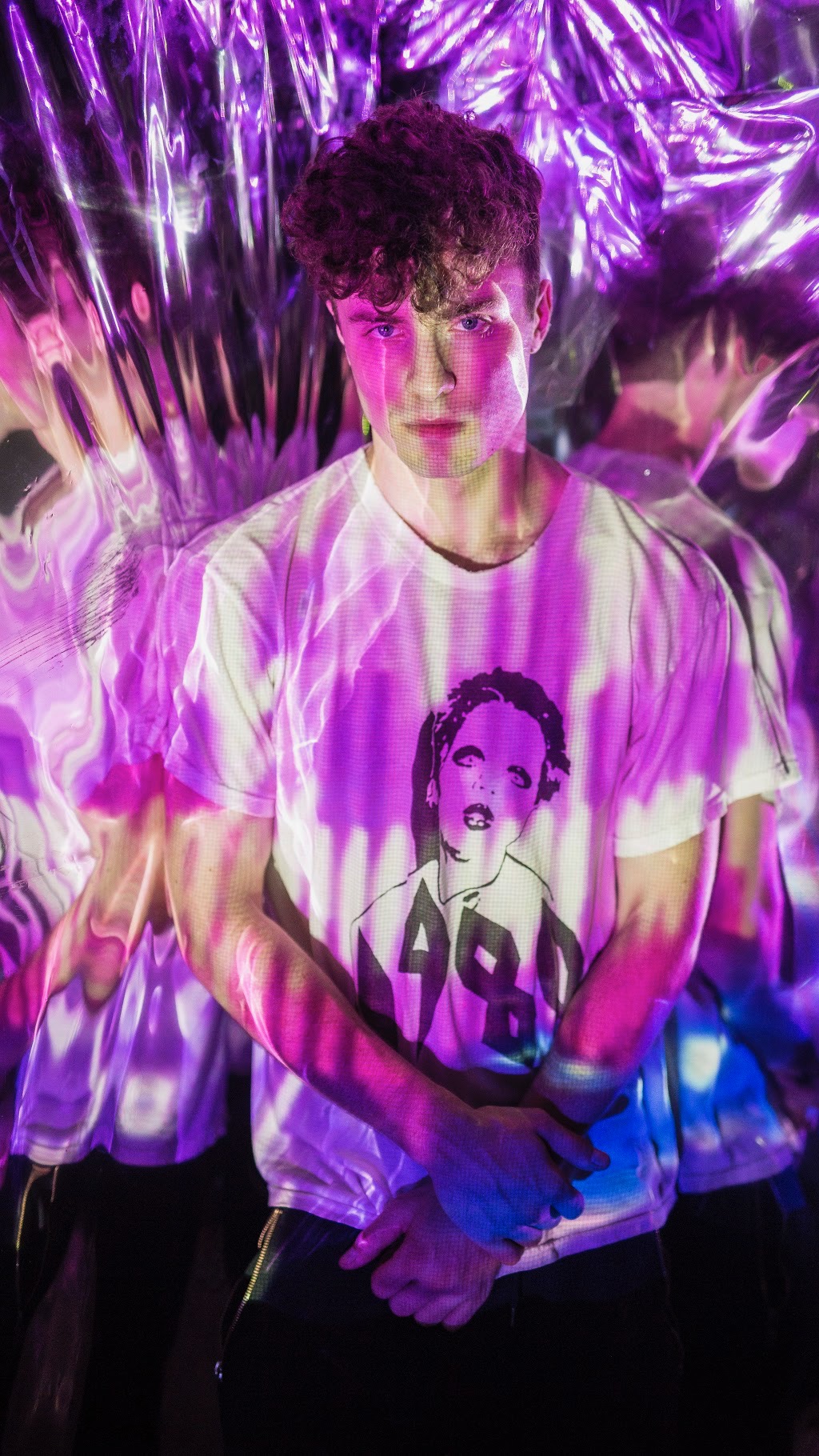 Christopher completed his first year at NYU receiving all B’s and A’s despite his primary focus being on producing night club events for young people and his own music.  He asked me if he should apply to enter NYU’s Clive Davis School of Recorded Music.  I gave him advice, “of course you should, it’s your passion and NYU has the best program.”  I got excited for the prosperous future an NYU degree would bring him.  Well, he quit NYU to spend this year doing his event and music interests in NYC.  His superpowers are: not listening to advice and laser focus on what he wants. Rachel and I told him he would need to get a job and support himself.  So he is doing the New York standard survival jobs for aspiring artists—busboy in a restaurant and caterer employee. And at the same time making great music.  Here’s a sample.

Rose says,  like his Facebook page, listen to his other songs on Sound Cloud,  go to I-tunes and/or Spotify search “Rain and Flashing Lights.” and buy his music !  And know that people always say yes to Rose.