How deserted lies the foot,
once so full of cushioning tissue!
How like a widow is she
who could once walk on hard pavement for miles.
She who carried of the body without complaint
Is now a cracked harbor of plantar fasciitis.

Bitterly, she weeps in the locker room,
fungus on her toenails.
As the body above her leans slowly to the side,
his hand bracing against the locker door
No longer able to balance on one foot while removing the Chaco sandal.

People heard her groaning
but there was no one to comfort her.
They were too busy with their own problems.

On hearing one of my lamentations, any number of my family, ranging from ex-wife, partner, child–but not my mother because she would agree with me–would laugh at me and call me “overdramatic.” I would point out that Dr. Atul Gawande, best-selling author and Harvard Professor of Surgery, is on my side; though he may not know it. His new book, “Being Mortal,” is marketed as an approach to “live a good life all the way to the very end.” I read it. It’s not about that. It’s about decrepitude. Interspersed with analyses of the medical science of aging, he tells case histories of people he knows–patients, friends and family members. Every single case shows a person who was once capable, fun-loving and intelligent, unhappily deteriorating into illness, dependence on others, and painful death. I shouldn’t have read it. I should have gone with my usual genre, an Anita Blake Vampire Executioner book. Anita, unlike Dr. Gawande’s friends, always triumphs over death.

How does she do it? She sees what needs to be done and she does it. So do I. My anti-decrepitude list:

For all of 2015, I took a certification program in non-fiction writing at the University of Washington. In our second class we read a short piece in which the author talked about giving a lecture to college students on the challenges of writing. The author told the students that writing was hard. He talked about the challenges of confronting the blank page, the never-ending revisions, the alone time. His co-presenter was a doctor who did writing “on the side.” The doctor told them that writing was easy. He talked about how he wrote for an hour or so per day as a relaxing diversion from his work at the hospital. Everyone in the class laughed at the doctor’s ignorance.

After 12 months of writing assignments; after learning how to give and receive feedback during our workshop sessions; after learning about the genres of memoir, sport, humor, travel and science writing; after reading masters of non-fiction writing who could keep even me, an Anita Blake Vampire Executioner reader, riveted for 500 pages on such topics as the biography of a Baltimore woman who died of cervical cancer in the 1950’s and whose cancer cells became the first immortal tissue culture line; after learning that I needed to build a platform (a blog and website), write a book proposal, get a editor, and get an agent; I thought back to that doctor and felt intense dislike towards him.

In his book, Dr. Gawande never mentions how a person could manage to write best selling books while also being a doctor. He talks about ADL’s (Activities of Daily Living): the ability to use the toilet, eat, dress, bathe, groom, get out of bed, get out of a chair, and walk. Apparently, at age 55, I will soon be changing my focus from Dr. Gawande-type-multi-career-productivity to ADL’s. It could happen any time from illness, or gradually over the next 10-20 years from aging.

So, what should I do for the next 10 years? Should I finish up my medical career in Seattle, then move to warmer climate and live the rest of my days eating chocolate chip cookies between beach walks? Should I re-start my work as a teacher of communication skills? Should I write that book? The one I had started in writing class, the one whose pitch (which we learned to write, had recite by memory in front of the class, and were instructed to share with others at any opportunity) went like this:

“My book is called ‘A Doctor Finds His Chakras: A Journey to Enlightenment Through the Human Body.’ The doctor is me. I’m a Stanford trained MD who has been an anesthesiologist for more than 25 years. When it comes to healing practices I believe in verifiable truth. I have also been a student of Tantra, the offshoot of Hinduism that uses the body as a source of happiness. Tantra has given me deeper joy than I could ever have imagined. In the book, I explain the chakra system of Tantra through my own personal experiences as well as through their science, methods and history. By the end of the book, you will have a recipe for finding deep joy in your life in the place closest to you, your own body.” 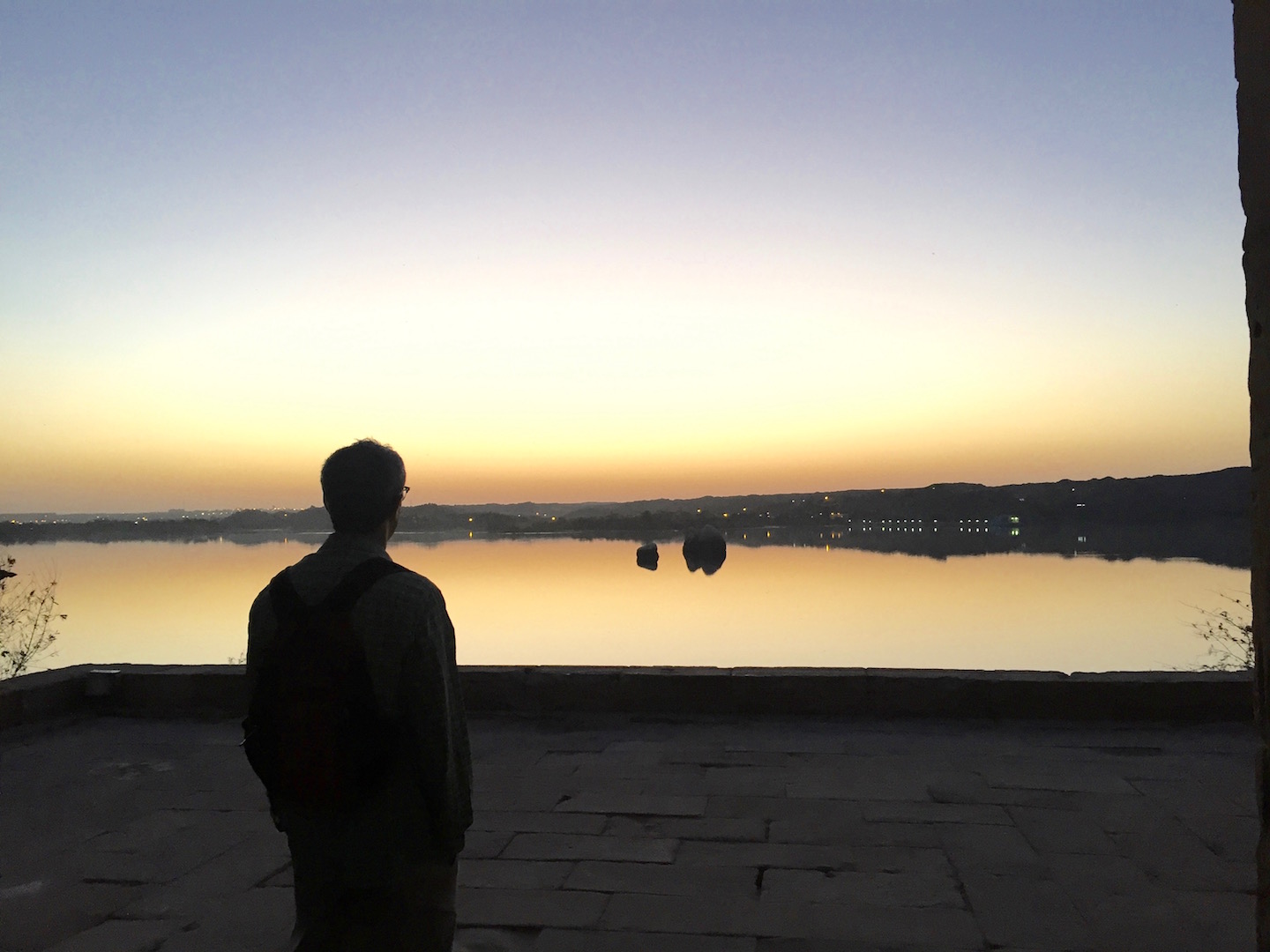 I needed clarity about the book, and my next 10 years. So I went to Egypt. I have a good track record of getting answers at sacred sites and Egypt has a lot of those.  At the Isis Temple, located on an island in the Nile River  I was on a solo walk in the vulnerable state of a man who had not had breakfast because we started out at at 4:30a.m. to avoid tourists and the heat. I looked at the sunrise (pic), focused on my question, “What should I do?” and got an answer, “Richard, you have perfect clarity in your next footstep. That’s it. There is no such thing as clarity in the future.” 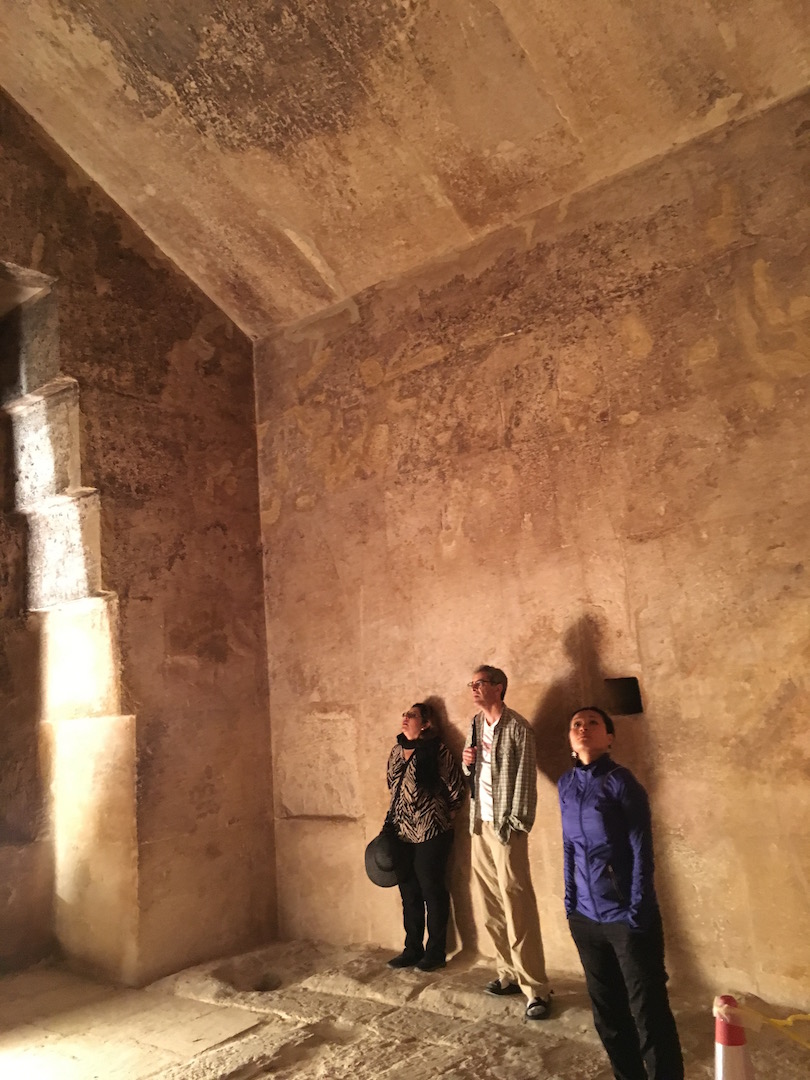 So typical of ancient gods, to answer a question I wasn’t asking. It may have been a good idea, but I really wanted to know what to do about the book and my career. So like a child who didn’t get what I wanted from the first parent, I went the other one.  At the last sacred site of our tour the Great Pyramid of Giza, I crawled up the four foot tall 45 degree sloped tunnel to the King’s chamber, a stone room with a high ceiling which 3000 years ago held the mummy of one of Egypt’s first pharaohs. I was in the vulnerable state of a man who had not had breakfast because we started out at at 4:30a.m. to avoid tourists and the heat. The air was stale from lack of ventilation. My heart pounded as I contemplated the 1000’s of tons of ancient rock held above us by decaying ancient structures.

The lights went out. I asked, “What should I do?” I had a vision. I saw a yellow and black vortex. I went into it knowing that the answer would be at the bottom. At the bottom I found a knife whose handle was covered in semiprecious stones. Aha ! That is the knife of clarity. Finally, a Temple that would actually answer my question. Now what should I do with that knife? (Warning: The next part contains dissection that may be difficult for sensitive readers.) I took the knife and cut into myself to remove internal organs so that I could be mummified. Seemed like a good idea at the time. But then it occurred to me that I was trying too hard. The Temple spoke, “Richard, It’s a knife! It’s for cutting up food, not yourself.”

The lights went on. I crawled back down the tunnel contemplating yet another enigmatic answer from the gods. Then I rode a camel. Then I rode a bus, back to the Four Season’s Hotel of Cairo. There I received the Answer.

My eyes got moist. Could this be my life? A selection of delectable treats in every moment where my only job is to chose and savor. I flew home, still not knowing what to do. I arrived to find that my family was already involved in their own Buffet situations.

Perhaps because of the food centric nature of his Indonesian heritage, perhaps because of his ability to eat 5000 calories a day and still weigh less than me, my partner Fajar is the grand master of the buffet. 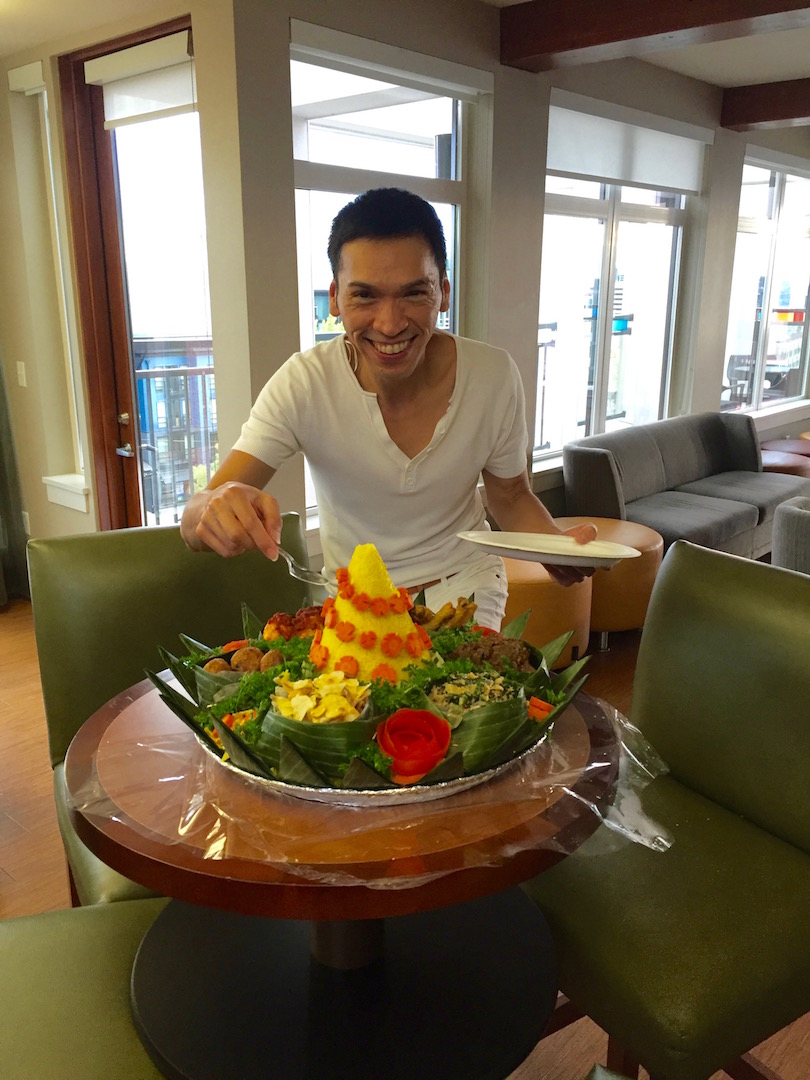 Whether it’s Seattle, San Francisco, Paris or Bangkok, he flies like a homing pigeon to the best bakeries and restaurants. Every evening he takes in the day’s pop-culture offerings on TV, while eating tropical fruit, laughing so loud that I can hear him while I’m in the shower. I try to explain my agonies over book writing, hair loss and the looming ADL’s. He smiles and in his pre-school-teacher-voice, says to me, “You’re being silly.” 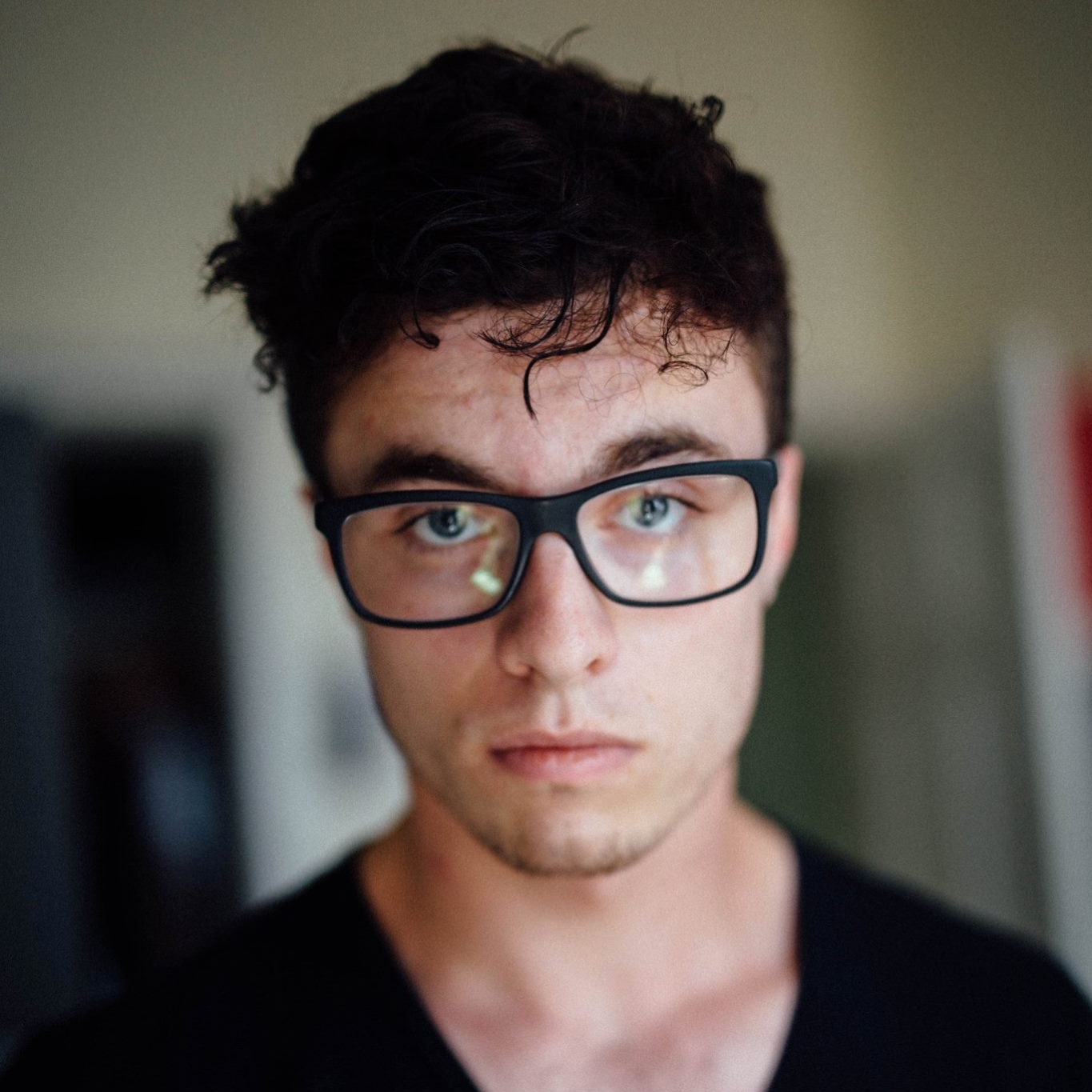 My son Christopher, is now 19 years old and has spent this last year, his “gap year,” in NYC. I explained to him my revelation at The Four Seasons. He was not impressed, “Dad, last week I did a buffet event at the Mandarin Oriental. You wouldn’t believe who was there. What? You’ve never heard of him? Oh my God.” In between performing his music, creating fashion designs, and working swanky events with other young good looking model-types, he did his college applications. I tried to motivate him to put some effort into the college process by explaining, “The ultra-buffets you like require a big bank account which requires a good job which requires a good college which requires a well-done college application!” He was not impressed. So Rachel and I hired a team of expert motivators, a Jewish couple from the Bay Area whose business is getting millennials to do their college applications. They did such hard work with him that I ordered them a commemorative coffee mug after Christopher completed his last application, one minute before midnight the day they were due. End result:  Christopher will continue his ultra-buffet  into college as he was accepted to his first choice, NYU. 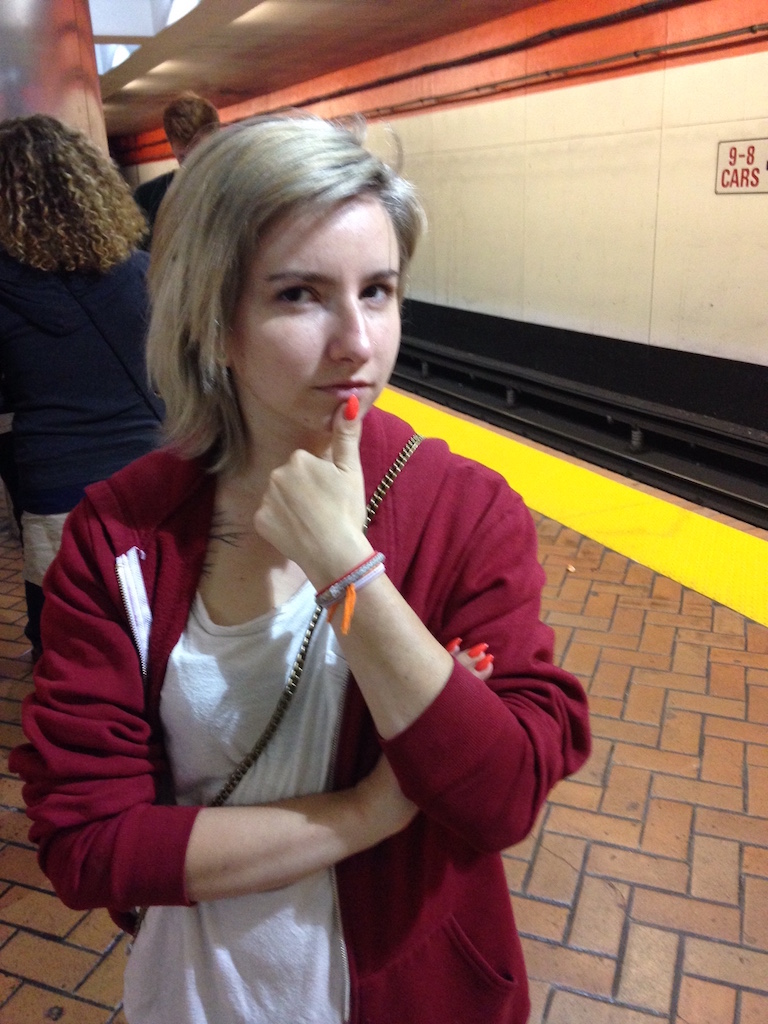 My daughter Rose, now 22, is finishing her undergraduate at Evergreen College in Olympia. I explained to her my revelation at The Four Seasons. She was not impressed, “Dad, those buffets are examples of white privilege. The prisoner youth that I mentor will never have the chance to go the Four Seasons. By the way, I’m voting for Bernie Sanders.” Rose was part of Evergreen’s Gateway’s program where faculty lead seminars for incarcerated youth and students serve as academic mentors and coaches. Rose discovered that she likes many of the incarcerated youth better than spoiled college students from wealthy families. She has decided to personally reform America’s prison system. I tried to motivate her to apply to law school so she would have a backup plan in case she ended up preferring The Four Seasons buffet to the prison chow line. Rose does not need a team of millennial motivation specialists. She has her own personal trainer and career coach, her dog, Boo.

Boo wakes her up at 6:30a.m.every day for the first of several walks per day. He supplies her with the affection that would otherwise be sought out from human males who would distract her from her career ambitions. End result: Rose got a prestigious internship this summer at a San Francisco Law Firm and has started her plan for getting high LSAT scores.

Surely some revelation is at hand;
When the vast image of the ADL’s trouble my sight, a waste of desert sand,
A shape of hairy Jewish body with thinning head hair
Puts one foot of toe fungus and plantar fascittis in front of the other
Slouching, nay sauntering, towards Bethlehem to be born.

2 thoughts on “On Being 55: Plantar fasciitis, Children and the Four Seasons Brunch Buffet”